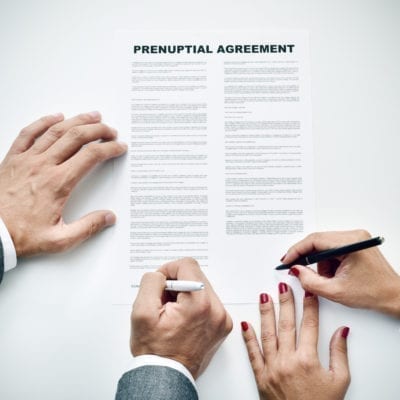 If you were wise enough to invest in a prenuptial agreement then the last thing you want to hear, years from now, is that the prenup is null and void. Or that your spouse is asking your judge to throw out the prenup, and the judge agrees.

After all, the whole point was to speed the divorce along, to make the division of assets easier to handle.

And if a judge throws out your prenup, you’ll be right back where you started: having to either negotiate a settlement or go to court.

There are five things a prenup must do to hold water.

If the judge gets any whiff of a prenup that might have been signed under duress than he or she will throw it out of court.

Duress doesn’t necessarily mean you put a gun to your spouse’s head and demanded they sign. The court is just as troubled by psychological duress.

For example: you’ve paid all the deposits, invited 500 people to the wedding, and are a week away from saying “I do,” when you suddenly spring the prenup on your significant other. He or she might sign just to avoid the embarrassment and stress of having to call off the wedding. And he or she might agree to things that they should never agree to as a result.

To be on the safe side, make sure your prenup is signed six to nine months before the wedding.

The Prenup Must Protect Both Parties

It doesn’t matter if one of you is a prince or princess, and the other a pauper. Agreements must be in line with things the court would approve of if they were dividing assets.

California is a community property state. This means you and your spouse equally own all money and assets that you acquired together from the date of marriage. It doesn’t matter if you make $100,000 a year and your spouse makes $25,000 a year. If you saved $500,000, that money belongs to both of you even though theoretically your spouse was only able to physically contribute to ¼ of it.

If one spouse stays home making $0.00 for the duration of your marriage, your spouse would still have an equal claim to all $500,000.

There is such a thing as separate property: you can protect a piece of real estate or a properly protected inheritance you owned prior to the marriage. But you can’t create an agreement that says, “if you divorce me, you get nothing.” That only happens on TV.

All Clauses Must Be Enforceable

Sorry. You can’t enforce a clause that says your ex gives up all rights to everything if he or she cheats.

You also can’t enforce lifestyle clauses, like demanding your spouse produce a child of a certain gender, maintain a certain weight, or perform certain sexual acts every night. People have tried to write these in, and judges have either ignored these clauses or thrown out the entire agreement.

Any clause relating to custody or parenting time is also unenforceable. Prenups may only cover property. Child custody will get decided as normal whether you had a prenup or not.

Both Parties Must Disclose All Assets

If you don’t, the agreement is considered fraudulent. Not only that, but judges don’t take kindly to this, anymore than they take kindly to attempts to hide assets during a divorce.

Before signing any prenup make absolutely certain that you haven’t forgotten to include something in your list of disclosures. Even an innocent failure to disclose could nullify the agreement.

Both Parties Must Have Lawyers

Each person must have a separate lawyer who represents their interests and only their interests when the prenup is being drafted and signed. Each party must have sufficient time to go over the agreement with their lawyers and to question clauses, or request amendments to them.

If only one person has a lawyer, the courts tend to believe the agreement is one-sided. It’s theoretically possible that you could both forgo having lawyers, but the likelihood that you’ll accidentally write clauses into the prenup which nullify it is high.

So if you and your significant other are thinking about signing a prenup, make sure you get help. Otherwise, you’re wasting time and money.

How to Tell if You Need a Prenup

The Financial Mistakes to Avoid in Your California Divorce

Why Are More People Choosing a California Prenuptial Agreement?